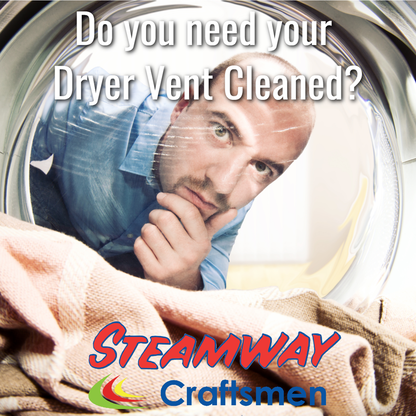 Why have your dryer vents cleaned?
1.       Fire Hazard
Fatal Fire:  Clothes Dryer Could Be Culprit – Bayside, Wis., Posted 8:16 am November 4, 1998 – A clothes dryer vent linked to a fire.  Investigators suspect that lint accumulating in the dryer vent may have ignited and started last weekend’s fire that killed the Goldman family.  Police Chief Bruce Resnick says it appears a load of clothing was placed in the dryer before the family went to bed.  Lint build-up can cause reduced airflow, which in turn causes overheating.  When this happens the high temperature limit safety switch cycles on and off.  Most switches were not designed to cycle on and off continuously which can cause them to fail.
The Consumer Products Safety Commission estimates that there are an estimated annual 15,500 fires, 10 deaths, and 310 injuries associated with clothes dryers; also over $84,000,000 in property damage.
Accumulation of lint and reduced exhaust airflow provide conditions ripe for a fire.  Lint is highly combustible.  Lint is also one of the main ingredients in a recipe for home-made fire starters.  If you have an older home you might have a duct system that is not up to specs for your dryer.
2.       Dryer Performance
Proper airflow can decrease drying time, thus decreasing operating costs.  It helps the dryer to operate efficiently, which can extend the life of the dryer.  An extra bonus is that clothes will dry at lower temperatures and in less time.  This will help to prevent unnecessary wear and tear on clothing, thus extending their life.


Who needs this service?
Almost Everyone With a Dryer!  Especially those homes with dryers located on inside walls, or those located on second floor laundry rooms.  These centralized locations cause dryers to be vented greater distances, up to or over 50 feet, resulting in lint buildup and other obstructions which can seriously affect the performance of dryers.
Most dryer manufacturers recommend the yearly delinting of dryer vents, for the dryer to work at its maximum efficiency.  People living in older homes probably have a system that was for an older dryer, thus when they replace the old dryer with a newer model the ducts may not be up to the new dryer’s specs.